Where the Money Goes

We are all sensitive to the amount of taxes we pay, and some are downright upset. Statements similar to the following are frequently heard: “I pay all these taxes; why can’t I get my roads fixed?”

Let’s first look at which taxes go to maintain roads. The principal source of funding for the Road Commission for Oakland County (RCOC) and Michigan Department of Transportation (MDOT), is the Michigan Transportation Fund (MTF), which is made up primarily of the state fuel tax and license plate fees. These are also the main sources of road funds for Michigan’s cities and villages.


The state fuel tax is 26.3 cents per gallon and, thus, represents a fixed income to those entities. In fact, if you have purchased a new car in the last few years that gets better gas mileage than your previous one, odds are you’re driving as much or more than before, but actually paying less in fuel tax to maintain the roads.

Some federal fuel tax revenues are available, but the bulk of these go only to MDOT for projects on state highways (freeways and roads with a ‘M’, ‘I’, or ‘US’ in their name such as M-59, I-75, or US-24).

Many cities and villages supplement their MTF revenues with additional funds from their general fund or from some other source. They discovered long ago that the MTF revenues were not sufficient to maintain their street systems. 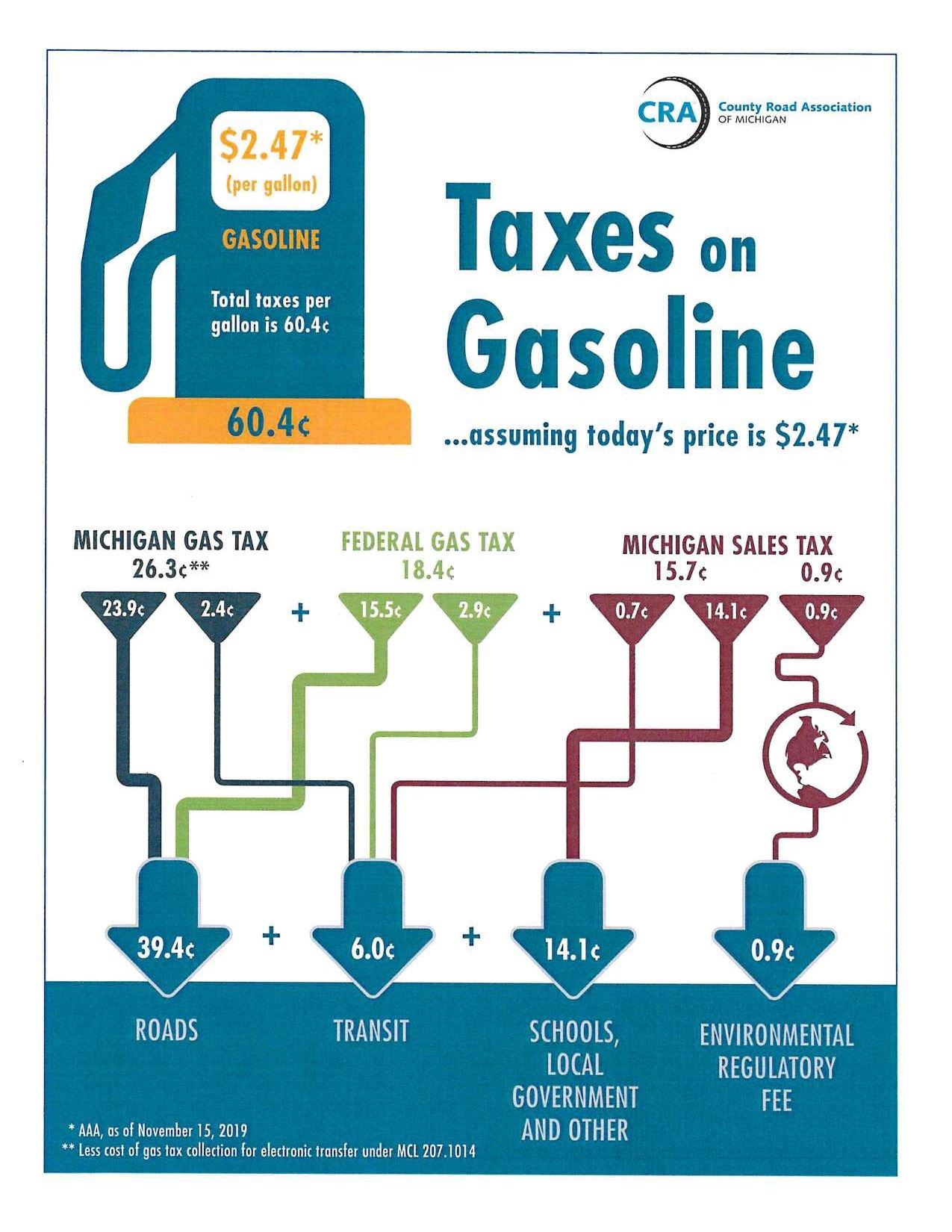 
Since RCOC is not part of county general government, it has no general fund or other sources available to dip into.

A common misconception is that property taxes automatically go for roads. It is true that some of those general funds that a city or village might use on its streets could be property taxes. It is also true that if a community chooses to contribute to a specific RCOC road construction project, it may use some property taxes.

Some cities, villages and even townships have passed special millages for road improvements, but a vote of the taxpayers was necessary.

We do pay a lot of taxes, so where do those dollars go? Upon reviewing the latest national data, it is interesting to note that Michigan ranks among the top states in expenditures per capita for health, education and welfare. It ranks in the bottom nine in expenditures per capita for road maintenance and construction. And, this has been the case for more than 40 years.

Obviously, Michigan’s top priorities have not included roads. Thus, if you travel in another state that appears to have much better roads, it could be because roads have been higher on that state’s priority list.

It appears that there are three choices: 1) Spend more on roads and less on welfare, health and education; 2) raise new revenues for roads; or 3) put up with our deteriorating road system. Which do you prefer?

In Oakland County, a large part of the problem has been the impact of all the development that has occurred in recent years. Unfortunately, road funding does not automatically benefit from development. Also, Oakland County does not get back all the state-collected fuel taxes and license plate fees it generates and sends to Lansing.